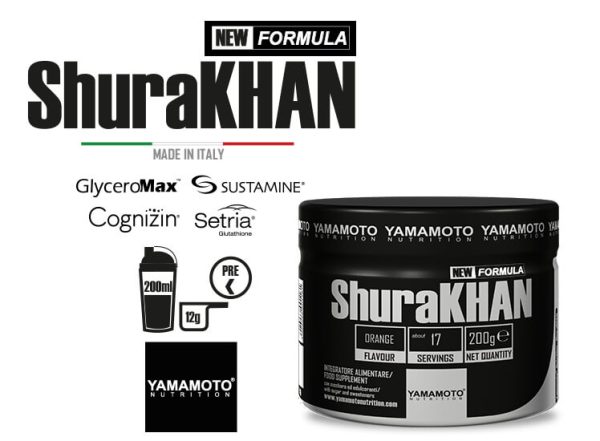 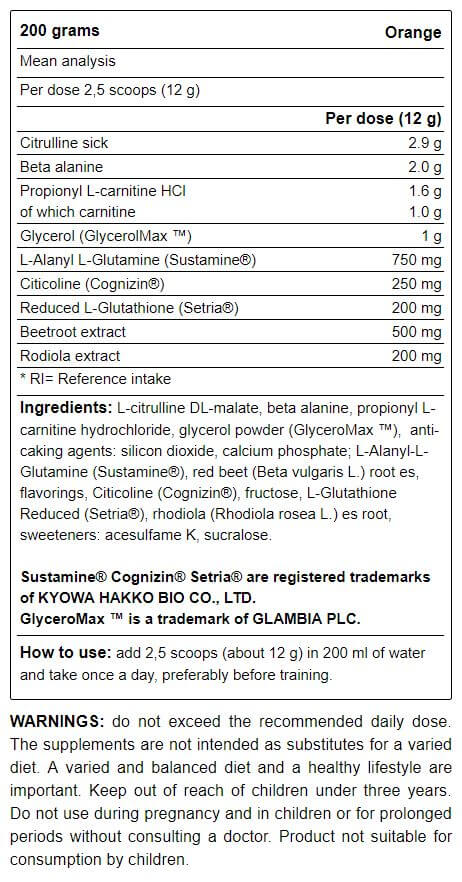 ShuraKHAN® - New generation pre-workout. It is not the usual pre-workout of amino acids and stimulants. It is a new concept of intending explosive energy, bullying and focus during training.

We live in the age of frenzy and achievement of the highest performances in all our fields, so much so that we very often feel the need to "caffeinate" ourselves to get the best performance during our days. We often get to our workout debilitated or weak, so an "extra gear" is very often welcome. This is why all the pre-workout supplements with stimulants (more or less legal according to the country of origin) have become so fashionable, to the extent that for many it is now more important to "feel" the adrenergic charge than the real effectiveness, quality of content and formulation of the product. The various "claims" of the virtues that certain components have are rampant, speaking of thermogenic effect, suppression of appetite, powerful stimulation at the nervous-mental level, with greater focus on making the athlete a shark thirsty for blood .... but at what price? Are we sure that all this is so useful and worth the risk, namely the side effects that certain supplements enriched with adrenergic substances can lead to in the short and long term? Maybe a few kilos more on the barbell, more determination, more resistance so welcome in the most difficult stages of a race diet for example, but "pollutants" that lead first of all to easy tolerance or excessive adrenal over-stimulation with various effects on the production of cortisol and other stress-related hormones, "down" mood phases or accentuation of states of anxiety, with tachycardia and an easy tendency to dehydration, without forgetting that all this can extend to the period of sleep, which may end up being easily disturbed. I have always been very opposed to pre-workout supplements that force the nervous system excessively, because I am aware of their mechanisms and targets of action and then their side effects. In my continuous chats with professional athletes, both in body building and in combat sports, there is always the need to have maximum performance, to sense work and muscle contraction with the best focus on training, especially in the hardest moments of preparation, but without excessive stimulating effects on the heartbeat, anxiogenics and sleep disturbers.

Constant research and development work at Yamamoto has led to creation of the new SHURAKHAN. From a product that already exists in our range, I felt it had to have something more for making it an exceptional product of its "no stim" kind, which aimed at performance, encouraging maximum blood flow to the muscles, maximum hydration, but above all giving better lucidity and concentration without alterations to the nervous system, thanks to a series of elements that make this product a new Yamamoto excellence.
The new Shurakhan® is the first supplement that stimulates maximum muscle pumping with a nootropic effect, resulting from the combination of the latest generation elements, formulated for the body builder or athlete who wants to maximise the vasodilator effect by bringing precious blood and nutrients to the muscles for a prolonged period even after training, keeping the muscle cells well hydrated and, above all, bringing that extra energy gear to mental focus in training and ... towards our goal.

Thanks to the extremely effective "Setria-performance®" combination patented by Kyowa® based on Citrulline and Setria Glutathione already used by us at Yamamoto in the Kamikaze and Glycobol Ultra products, we will have a sustained and constant increase in muscular pumping, with a lasting effect also in the post-training phase, enabling not only maximum flow of precious oxygenated and nutrient-rich blood to the muscles, but an improvement of the circulation itself and therefore of recovery, also under the aspect of removal of the waste elements of muscular work. This sustained muscle pumping will be supported by the powerful Propionyl-l-carnitine and beetroot extract with their marked and proven effects on nitric oxide stimulation. Promoting a powerful and continuous blood supply that will last for a certain period after training, we will have oxygenated muscles and continuous nutritive enrichment, all to the benefit of more rapid reconstruction.
In order for the cell to maintain the anatolic "building" structure, it must be hydrated. Glycerol has  been added to the "team" of active elements in the form of HydroMax®, the most effective version which is very popular overseas, based on 65% glycerol and 35% silicon, more highly stable and dispersible in water than the previous monostearate version. The oral intake of HydroMAx® is rapidly absorbed and distributed through the intracellular spaces, increasing the recall of liquids in blood and muscular tissues, thus counteracting dehydration during exercise, improving and prolonging the efficiency of performance itself and muscular pumping thanks to the increase in plasma volume.

To further promote maximum cellular hydration, we could not do without Sustamina®, the Alanil-l-glutamine dipeptide characterised by great stability compared with its free form and absolute solubility. Also present among our products since 2015, It should be noted that free-form glutamine is rapidly degraded into ammonium when put into solution and is poorly soluble, while alanyl glutamine on the other hand is extraordinarily soluble. In addition, free-form amino acids compete for their uptake with highly selective amino acid transporters, with dipeptides such as Sustamine much more easily absorbed being preferred to much less selective carriers (PEPT1) and with lower expenditure of energy, ensuring a much higher bioavailability. which translates into the ability to perform its valuable functions not only as a "nutrient" for enterocolitis or the immune system, but in this case promoting cellular hydration thanks to the combination of this dipeptide which will greatly improve the increase in absorption of water and electrolytes at the cellular level, thus benefiting the maximum potential of the anabolic environment.

Speaking of maximum yield of performance, an element that often characterises pre-workout beverages is beta-alanine, a dipeptide consisting of the combination of the two amino acids L-histidine and Beta-Alanine under the action of the carnosine synthase enzyme, then stored in skeletal muscle to be released by the carnosinase enzyme when necessary. Its integration is shown to be capable of increasing muscle carnosine concentrations and consequently mitigating pH reductions induced by physical exercise, allowing greater re-use of lactic acid for energetic purposes, restabilising muscle pH and delaying inhibition of the enzymatic system resulting from acidosis. What does this all mean? That it really allows us to sustain our training more intensely and effectively for a longer time. More work, more effective yield with less tiredness.
But the most innovative part of this product is the introduction of Cognizin®, the prestigious clinically tested Kyowa patent based on Citicoline, which helps stimulation of the brain cells and, at the same time, optimises the neuronal electrical impulses that activate thought and improve memory, increasing the attention span and making focusing, concentration and the ability to make it last "sharper". Just think about the difficulty sometimes of sensing the contraction of a muscle that we are working and maybe because of a lack of concentration, or because of an objective state of strong fatigue or depletion, we do not feel it working as we would like. So it is clear how it can also be an excellent aid for the athlete subjected to intense preparation as a psychophysical support. Moreover, thanks to its different mechanisms of action, citicoline is the element which, better than any other, can promote the intense activity of repair and regeneration of brain cells. Increasing the levels of synthesis of neurotransmitters, such as acetylcholine, it has antioxidant and counteracting power against the decline of aging. It belongs to the modern class of elements called "nootropics", which are natural psychoactive substances as in the case of Cognizin® (but which can also be synthetic), which positively affect cognitive abilities and performance, bringing maximum focus as in the case of intense training, promoting the capacity to optimise it without losing concentration, a phenomenon that can often occur in states of severe pre-contest psychophysical fatigue, for example.

Rhodiola is another component of the new Shurakhan; the well-known phytotherapeutic extract was brought to fame as an adaptogen by Russian researchers who highlighted its capacity for increasing the resistance of particular chemical and biological agents in our body, with a consequent increase in physical resistance and the sense of well-being. The adaptogenic properties of rhodiola, in particular, have been attributed to two of its active ingredients, para-tyrosol and salidroside. These influence the levels of some mediators in the brain and in peripheral, cardiovascular and respiratory tissues, and reduce the secretion of catabolic hormones such as cortisol. Rosavine and phenols are also among the most pharmacologically active compounds. The choice of using robiola in our new product is justified by scientific evidence on the mechanism of action of the active constituents. In fact, it has been shown that by activating an enzyme, adenylatocyclase, at the level of fat cells, rosavine promotes the release of fatty acids from the blood. Mobilisation of these determines an increase of energy substrate for the production of ATP that will be available for muscle needs. As a consequence, an improvement in physical performance and an increase in resistance to fatigue is obtained. Moreover, Rodiola has the ability to reduce the onset of DOMS (delayed onset muscle soreness) after intense physical exercise, thus facilitating post-workout muscle recovery, reducing post-concentrations of markers of muscle damage such as myoglobin, creatine kinase and lactate dehydrogenase, and in this way supporting the much-cited myoprotective role and optimising mitochondrial energy flow, ensuring a better oxidised metabolism.
The evolution of this new version of Shurakhan is the ideal choice for any athlete who in pre-contest, or in any case during the phases of particular intensive training of building, wants to have that extra boost and psychophysical lucidity to optimise each repetition, each series, acting on more fronts in support of maximum performance and creating the best physical conditions for an excellent and prolonged pumping, a more marked cellular hydration to support a more ready and effective muscle recovery, without having all the negative effects immediately (palpitations, tachycardia, dehydration and excessive anxiety) and in the long term (negative action on the adrenal glands) of stimulants.