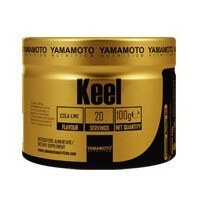 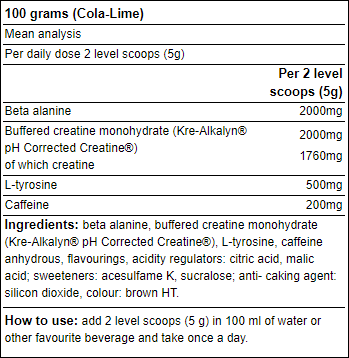 Always used in the world of sports, we couldn't leave out a supplement based on caffeine, well-known for its highly stimulating ergogenic effects, which benefit performance and concentration, as well as raising the pain tolerance threshold. Its most important characteristic is its ability to mobilise fatty acids from accumulated stocks, promoting their use to generate energy, which saves valuable muscle (and hepatic) glycogen, and thus extends the potential duration of effort with less fatigue, bearing in mind such savings are crucial during the first fifteen minutes of performance.
Recently, beta-alanine has found a lot of support on the endurance sports scene, as well as in contact sports, largely due to its effectiveness in improving fatigue resistance and to extending performance, buffering the negative effects of an additional opponent for fighters, which is lactic acid. Also contains Kre-Alkalyn®, which is one of the forms of creatine that, due to its high pH, is released in muscles at maximum power, enabling you to achieve extraordinary results and higher levels of ATP production without loading; in addition, it does not cause any of the unpleasant side effects that various people have encountered with other forms of creatine.